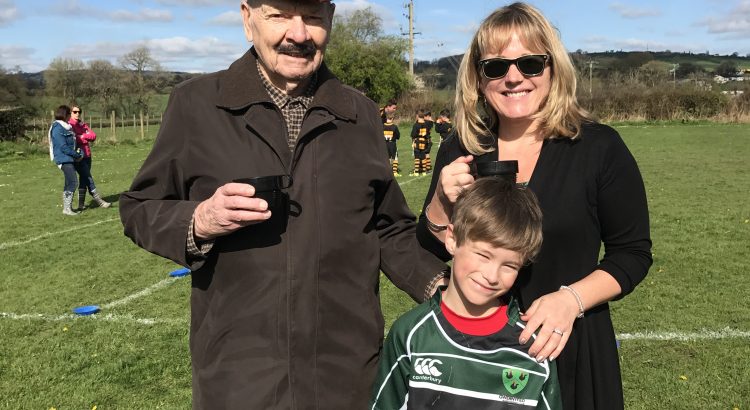 I recently had the great pleasure of meeting Bill Reese from California and escorting him on a tour of Wales with his wonderful daughter who arranged the trip for him as part of his 88th birthday celebrations.

Bill’s ancestors were from Wales and we found lots of connections to Reese, Rhys and Rees families.

It seems that Bill’s ancestors were from Pembrokeshire and were among the very early Quaker settlers who left Wales in the second half of the Seventeenth Century and founded Haverford County, Pennsylvania (named after Haverfordwest in Pembrokeshire).

Bill used to play American Football and wanted to see a rugby game. My son, Llywelyn, plays on a Sunday morning and we had a beautiful Spring day to watch the action at our local club, Gwernyfed R.F.C. in Talgarth. The picture shows Bill meeting Llywelyn and my wife, Marie.

Bill used to be a police chief and we arranged to meet my mother’s cousin who was also in the police force, here in Wales. Bill and David exchanged badges and patches and compared policing in California and Wales.