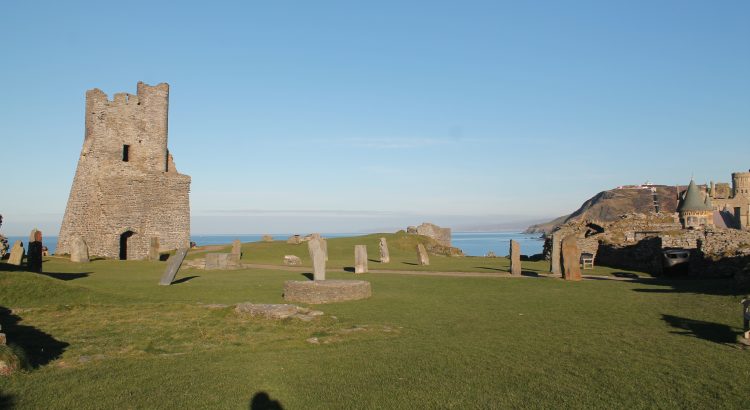 Learn more about Aberystwyth Castle, one of the major fortifications built by King Edward I in his conquest of Wales.

The area around Aberystwyth has a long history of fortification, including the Iron Age hill fort of Pen Dinas and two post-1066 castle sites.

When Edward I ordered the construction of Aberystwyth Castle in 1277, though, it was on a greenfield site, away from any previous fortifications.

The king’s 1277 campaign against the Welsh had started in the south, and in the early part of the year much of the resistance was quelled in the Tywi valley and other parts of Deheubarth (the lands of south-west Wales that were still ruled by native Welsh leaders).

Resistance continued in Ceredigion, though, something that may have played a large part in the decision to build a new royal castle at Aberystwyth.

When the main feudal muster of England was gathered at Worcester in early July, about 200 of the 1,000-strong cavalry force was split off and sent to Carmarthen under the leadership of the king’s brother Edmund, the largest landholder in south Wales.

He joined up with Payn de Chaworth for an advance that left Carmarthen sometime after 10 July and reached Llanbadarn Fawr by 25 July, ready to start the building work at Aberystwyth.

A new, sea-front location was chosen for the fortification, on a low headland protected by a sandbank to the north and a marsh to the east.

This was laid out as a concentric fortification, built in an unusual diamond shape to suit the contours of the headland.

Powerful gatehouses or towers were placed at each point on the diamond to offer formidable, projecting firepower, supported by the inner ring of defences.

Of most importance was the castle’s access to the Irish Sea, a fact that meant supplies could be delivered to a garrison even when it was closely besieged by land.

Sea access was also of great help in the initial construction, with building supplies and manpower brought in from England’s great south-western port, Bristol.

Most of the remaining Welsh resistance in Ceredigion fled to join Prince Llywelyn ap Gruffudd in Gwynedd, but by September the prince himself had submitted to Edward.

On 20 September the king sent permission to the southern commander, his brother Edmund, to return home, leaving Roger de Molis in command of the construction of Aberystwyth.

Master James of St George, Edward’s star engineer, was not responsible for the earliest works at Aberystwyth as he was not placed in overall charge of the king’s castles in Wales until 1278.

This was good for his reputation as there were problems with the initial design, some of the masonry having been built too close to the shore. This stonework suffered significant erosion from the sea.

The crumbling sea-front defences were not the reason that the castle fell in the Welsh rising of 1282, though; Aberystwyth was taken by subterfuge on 24 March, in the earliest stages of the war, which had been co-ordinated amongst many of the leading native lords of Wales.

The events were described in a letter sent to Gilbert de Clare, the earl of Gloucester who was in charge of the English armies in the southern theatre.

“Gruffudd ap Maredudd came to [Aberystwyth] alone and as though in peace, and sent to the constable of the castle and invited him to come to town to dine with him. So the constable went. And the constable had adjourned to that same day his court for the king’s men of that neighbourhood. So when they had dined, the constable wished to withdraw. And they ordered him to surrender, took him and raised the cry. And the king’s men from the court came and slew the men of the town and entered the castle; but they have not demolished anything.”

The notice that ‘they have not demolished anything’ contradicts the evidence of the Welsh chronicle, which says that after the castle and town fell the Welsh troops ‘burned them and destroyed the walls, but granted their lives to the garrison because of the imminence of the days of the Passion’.

Aberystwyth was recaptured by English forces in April, probably by sea. Master James arrived there in the middle of May to inspect the damage which had been inflicted both by the Welsh rebels and by the waves.

Soon afterwards, de Clare was told to find new burgesses willing to come to the town, while orders went out for masons from Gloucester and Somerset to gather at Bristol; at the end of June they set sail for Ceredigion. Work would continue on Aberystwyth until 1294 at a cost of at least £4,300.

The later history of Aberystwyth Castle

The outlay would prove effective, as the castle was able to hold out in the great Welsh rising of 1294.

The fortification was besieged, but the garrison were kept supplied from the Irish Sea and were able to resist.

The castle was allowed to decline in the course of the fourteenth century, though, and in 1404 it was taken by the great Welsh leader, Owain Glyn Dŵr.

The English recaptured the fortification in 1408, but only minor repairs were attempted.

It decayed further and was then slighted by Oliver Cromwell in 1649, after its garrison had chosen to side with King Charles I.

The ruined fortification then suffered the fate of so many historic monuments as its stone was ransacked by the local inhabitants for their own building work.

And remember that Dragon Tours can help you visit Aberystwyth, or any of Edward I’s other Welsh castles.