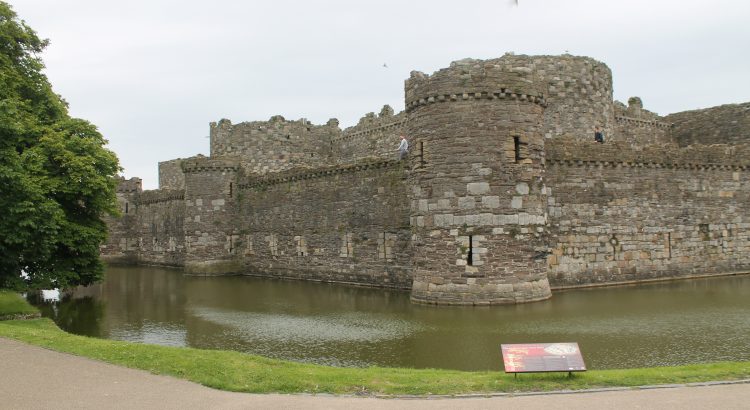 Learn more about Beaumaris Castle, a World Heritage Site and one of the major fortifications built by King Edward I in his conquest of Wales.

Beaumaris was the last – and, some would argue, the finest – of Edward I’s great castles in Wales.

It may have been originally planned at the same time as Conwy, Harlech and Caernarfon, after the war of conquest in 1283.

If it was considered at this time, though, the plans were shelved and it would be another 12 years before construction began under the king’s great Savoyard engineer, Master James of St George.

The harsh rule of Edward’s officers from his new castles in Wales sparked a huge, popular rising in the country in 1294.

The leader in the north was Madog ap Llywelyn, who would be proclaimed Prince of Wales. He came from a junior branch of the native Welsh princely line, whose traditional dynastic lands were in Merionydd.

Madog had been kept out of those lands by Prince Llywelyn ap Gruffudd (d. 1282). He was supported as an exile by Edward, who used him as a native pawn to be played against Llywelyn.

After the war, Madog may have expected to be given his traditional dynastic lands, but Edward kept Meirionydd in his own hands, his Welsh ally having to be content with a small estate on Anglesey.

When the rising came in 1294 Anglesey was its cradle, the English sheriff, Roger Puleston, being killed in Llanfaes.

By early 1295 Edward had crushed the rising, and on 10 April he was at the burgeoning town, ready to take his revenge.

The settlement was razed to the ground and the population moved to the site of Rhosyr on the other side of the island, which would be known as Newborough Llanfaes.

A new, English town would be raised on the old site of Llanfaes, to be protected by Beaumaris Castle.

Work started on the castle in April 1295 and in two seasons of frenzied building the structure that stands today was largely completed.

In the first summer an average of 1,800 workmen, 450 stonemasons and 375 quarrymen were employed, the wage bill amounting to around £270 a week.

The huge demand for resources would prove hard to justify in more settled times, and on 27 February, 1296, Master James and Walter of Winchester would write to Edward pleading for the funds to continue their great work:

“As to how things are in the land of Wales, we still cannot be any too sure. But, as you well know, Welshmen are Welshmen, and you need to understand them properly; if, which God forbid, there is war with France and Scotland, we shall need to watch them all the more closely.”

In 1296 the enormous, mounting cost of Edward’s Scottish wars meant that all royal building work was cancelled, excepting only expenditure on Beaumaris and Caernarfon.

A busy and productive summer of work followed in 1296, but the pace then dropped dramatically, proceeding slowly until Master James’ death in 1309 and dragging on under Nicholas Durnford until 1331.

The castle was never completed, the walls not reaching their intended height, but what was left was arguably the most perfect example of concentric fortification ever built, meaning there was no need for a keep.

Constructed on a low-lying, marshy site, it relied upon the strength of the walls rather than any natural defences.

The castle was dominated by an inner ward with six huge towers and two D-shaped gatehouses, every wall and tower provided with formidable projecting firepower.

Outside this was an outer curtain wall strengthened by 12 towers and two gatehouses, all surrounded by an 18ft-wide, water-filled moat that allowed sea access to the south gate.

The water approach was protected by another wall and firing platform that is thought to have carried a trebuchet.

In the English Civil War, its Royalist garrison held the fortification for four years before surrendering in 1646.

The castle was fortunate to escape slighting by the Parliamentarians, but fell into disrepair over the succeeding centuries.

Its popularity as a tourist destination began to grow in the nineteenth century, with extensive restoration work starting in the early twentieth century.

And remember that Dragon Tours can help you visit Beaumaris, or any of Edward I’s other Welsh castles.