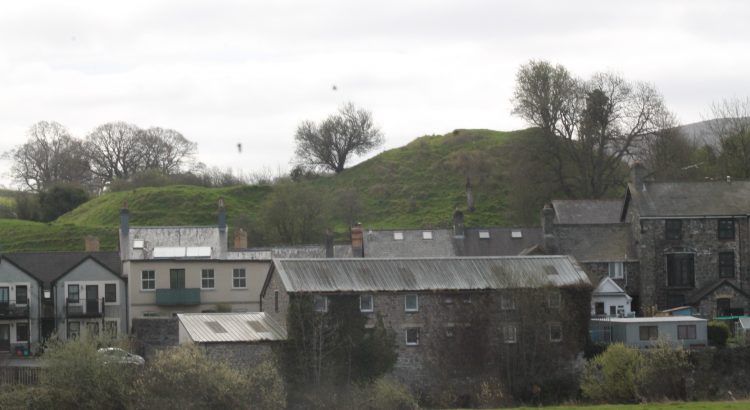 Learn more about Builth Castle, one of the major fortifications rebuilt by King Edward I in his conquest of Wales.

Builth is the site most-often forgotten in a discussion of Edward I’s castles in Wales, but it was a vitally important strategic fortification that was at the heart of the conquest of the country.

The town stands on a key ford of the river Wye and there are a number of earlier sites in the immediate vicinity that were fortified in the centuries before the elevated hilltop position was chosen.

The early Norman invader, Philip de Braose, built a motte and bailey castle on the western side of the town in the 1090s, but Builth regularly changed hands between Welsh and English in the next 150 years.

The site of what is now called Builth Castle is on the east of the town and this was certainly the fortification being used in the 1240s, when a stone castle was constructed.

It was this castle that King Henry III granted to his son, Edward, in 1254, along with all the other royal lands in Wales.

In 1256/7, Prince Llywelyn ap Gruffudd from Gwynedd led a wide-ranging revolt against the English rule in Wales, taking the lordship of Builth.

The castle remained in English hands, though, proving a major obstacle to Llywelyn’s ambitions further south.

In 1260, with England riven by civil disputes, the prince began a six-month siege of the castle, eventually finding a way over the walls before razing the fortification to the ground.

Llywelyn’s incredible success continued and his possession of Builth was confirmed in the 1267 Treaty of Montgomery, but the prince had over-reached himself and in 1277 Edward was ready to strike.

Some of the most bitter fighting was around Builth and other areas of what was known as the middle march.

Welsh defeat here was made inevitable when English successes in Brecon and south-west Wales allowed troops from these arenas to move up into the middle march.

By 3 May, 1277, the rebuilding of the castle at Builth was underway.

This was the first new royal castle that Edward would build in Wales, the stone construction placed on top of the existing motte with its commanding views of the river Wye.

It was, perhaps, the extent of the existing earthworks at the site that determined this castle would be a very traditional design, with its heart being a donjon atop an elevated mound; removing these earthworks to begin a new concentric fortification may have been prohibitively expensive.

Government records over the next five years show expenditure of £1,650 – an impressive sum, but a figure that would be dwarfed by the outlay on Edward’s other castles.

Nothing remains of the stone work, but at the heart of it was a great round keep, protected by a small chemise curtain wall, containing six towers.

A twin-towered gatehouse guarded the entrance to the keep from the bailey, which was protected by its own curtain wall.

After 1277 moves were also made to ensure the fortification was less isolated, with 120 axemen employed to cut roads in the woods between Builth and the castle of Cefnllys (outside Llandrindod Wells), which belonged to the Mortimer family.

Edward’s investment was well rewarded, as this key strategic fortification would never again fall to the Welsh.

When war was renewed between Edward and Llywelyn in 1282/3, Builth was again a key battleground and it was here that the army of the middle march gathered before the killing of Llywelyn in December 1282.

The prince was slain close to the village of Cilmeri, two-and-a-half miles west of Builth.

The castle withstood a six-week siege in the great Welsh rising of 1294/5, and would again hold out in the Owain Glyn Dŵr rising over 100 years later.

It was repaired in 1409 at a cost of £400, but over the years the fortification fell into ruin, meaning that little can now be seen at the site.

And remember that Dragon Tours can help you visit Builth Wells, or any of Edward I’s other Welsh castles.