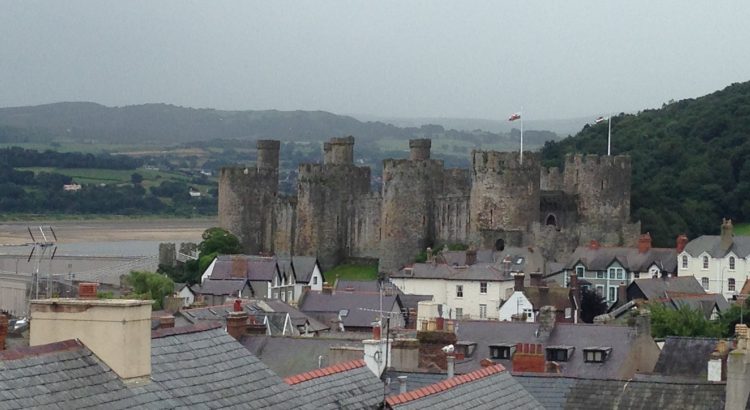 Learn more about Conwy Castle, a World Heritage Site and one of the major fortifications built by King Edward I in his conquest of Wales.

In the years of Welsh independence, the Conwy river proved time and again to be the surest defence of the leaders of Gwynedd.

Repeated English invasions stalled on the banks of the treacherous tidal waters, leaving the mountainous citadel of Snowdonia to the west in the hands of the Welsh.

The ruins of the castle of Deganwy rise above the eastern shore of the river, a fortification that regularly changed hands between English and Welsh.

Even when Deganwy was in English hands, though, it did little to help them advance further west, the waters being too unpredictable and the western shore too narrow, marshy and wooded to allow their forces to cross the river and establish a base secure from Welsh attack from the highlands.

The Romans had learned this lesson centuries earlier, the invading legions choosing to cross the Conwy upstream to the south where they built the fort of Canovium (now known as Caerhun) on the western bank.

Edward I and the construction of Conwy castle

By 1282, King Edward I of England had also taken the message on board. He had seen his father, Henry III, waste his time on expeditions that stalled at Deganwy, and in his own campaign of 1277 this was as far west as Edward chose to venture.

The war of 1282–3 was different, a war of conquest, and to force his way into Snowdonia Edward chose to cross the Conwy to the south, near Llanrwst.

In March 1283, with the Welsh resistance all but crushed, the king moved down the Conwy valley on the river’s western shore, then began to build the fortification that would ensure the permanence of his conquest, Conwy Castle.

The king’s chosen spot was occupied by the Cistercian monastery of Aberconwy, where Llywelyn ap Iorwerth (Llywelyn ‘the Great’) and other members of the dynasty of the princes of Wales were interred.

The monks were treated with care and respect, elaborate plans enacted to relocate their abbey and community seven miles upriver at Maenan.

The initial work on Conwy was under the direction of Richard of Chester, although overall responsibility belonged to the king’s star engineer, the Savoyard Master James of St George.

This was only one part of a huge construction project in Wales, but the importance of the defensive site meant that it was the main priority for Edward’s builders. The castle was largely completed inside four-and-a-half years.

The rectangular shape of the rock on which the castle was built meant that this would not be a concentric fortification, the elevated ground enclosed instead by a high curtain wall that was controlled by eight formidable round towers, with lower barbican outworks at either end.

The main entrance was defended by a long, stepped entrance ramp, leading up to a drawbridge and portcullis.

A cross wall separated the two sections of the inner ward, which could be held independently of one another.

The initial phase of construction was accompanied by the building of Conwy’s remarkable stone town walls, which stand at a height of nine metres, include 21 towers and three gatehouses, and run for over three-quarters of a mile.

A ditch offered further protection to the north and west, with the rivers Gyffin and Conwy covering the south and east walls of town and castle and offering the crucial benefit of direct access to the sea.

As can be seen in many aspects of Edward’s settlement of Wales, the king was keen to associate himself with the right to rule of the princes of Gwynedd.

In the construction of Conwy Castle this was reflected in the dismantling of one of Prince Llywelyn ap Gruffudd’s nearby halls, which was then reconstructed within the walls.

This may well have been the hall from Garthcelyn, 10 miles to the west near Abergwyngregyn, which the prince had used as his campaign base in 1282.

Conwy in the rising of Madog ap Llywelyn

The value of the king’s mighty fortification was shown in the great Welsh revolt of 1294–5, where the northern rising was under the leadership of Madog ap Llywelyn.

Conwy was attacked by Madog’s men in the earliest exchanges, but it held out. After gathering his forces, Edward quickly advanced through north-east Wales, then crossed the Conwy in time to celebrate Christmas at his formidable castle on the western bank.

Edward’s skill as an organiser and a calculating, methodical general were apparent, but on 7 January, 1295, he made one of the hasty, careless moves that had been a sporadically recurring theme of his military career.

With the Welsh opposition being slowly, relentlessly ground down, the king made a swift, ill-considered advance from Conwy into the depths of Snowdonia.

Perhaps the reason for Edward’s hasty action can be traced to the news of trouble in Scotland, resistance to English influence there encouraged by the problems the king was facing in both France and Wales.

It was mid-winter and the bulk of the king’s forces were on the opposite bank of the treacherous river, and hardly had the king left the shelter of his castle walls than his baggage train was ambushed, the invading force being on the receiving end of major losses.

Edward’s main column was too powerful for the Welsh to challenge, though, and the king was able to advance on to the Llŷn peninsula, reaching as far as Nefyn.

But few gains came from this reckless thrust and by 20 January the royal force was back at Conwy, where it found itself dangerously short of supplies.

Great care had been taken to ensure that the castle could be supplied from the sea, but appalling mid-winter storms meant that the ships could not dock, and the king and his men suffered significant hardship until finally, in early February, a break in the weather allowed the arrival of boats from Chester, Lancashire, Bristol, Dorset, Ireland and Gascony.

Despite the build-up of men and supplies, and the calls for action in France and Scotland, the king now proved far more reluctant to move from the safety of Conwy. It was not until the middle of March that Edward’s stir-crazy infantry managed to persuade him to allow them to begin raiding.

A mixed force including cavalry, archers and crossbowmen left the safety of the castle walls, surprising the Welsh while they were sleeping and recapturing much of the baggage train; according to the Hagnaby Chronicle, this took place on 10 March and the Welsh dead numbered 500.

This was accompanied by more positive news for the English from throughout Wales, including victory over Madog at the battle of Maes Moydog that meant the eventual complete victory of the English was only a matter of time.

Conwy in the rising of Owain Glyn Dŵr

Conwy Castle was rather neglected in the fourteenth century, despite some repair work undertaken by Edward ‘the Black Prince’.

Its walls were also used as a refuge by Richard II in 1399 when he returned from Ireland and sought to evade the forces of his rival, Henry Bolingbroke.

The part the fortification played in history two years later – at the start of the Owain Glyn Dŵr rising – was more dramatic.

Glyn Dŵr’s cousins, the brothers Rhys and Gwilym ap Tudur, entered through the gate disguised as carpenters, killed the guards and let their supporters in to take the castle.

After holding out for three months they negotiated a surrender, the terms including a royal pardon for the brothers that was granted by Bolingbroke (now Henry IV).

The castle again declined at the end of the Glyn Dŵr rising, although Henry VIII undertook some repair work.

In the English Civil War it was held by a Royalist garrison, then later slighted by the victorious Parliamentarians.

Edward Conway, the Earl of Conway, later undertook some restoration work, but gave up on the project and ordered that the remaining lead and iron should be stripped from the fortification.

The Conwy Suspension Bridge was built in 1826, Thomas Telford attempting to blend its design into the castle it reaches the western bank alongside.

Twenty-two years later a rail bridge was added, Robert Stephenson following Telford’s example in trying to give the design a medieval feel.

And remember that Dragon Tours can help you visit Conwy, or any of Edward I’s other Welsh castles.