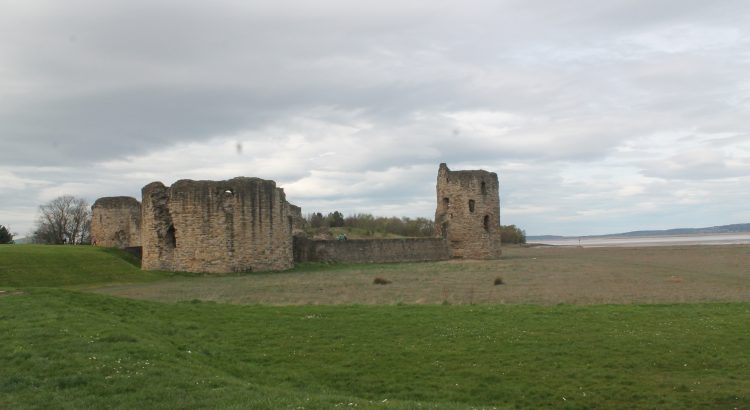 Learn more about Flint Castle, one of the major fortifications built by King Edward I in his conquest of Wales.

Flint lies just across the Dee estuary from Chester, close to the England-Wales border. The decision to build a major castle on an outcrop of rock here speaks volumes about the nature of medieval warfare.

Chester had served as the key staging point for virtually every major English expedition into north Wales, with ships to and from the ancient port city able to take advantage of the king’s control of the waves.

In the war of 1277, Edward I gathered the vast majority of his army at Chester, where he also directed huge volumes of supplies, and by late July he was ready to advance into north Wales against his enemy, Prince Llywelyn ap Gruffudd.

Given the gargantuan scale of the king’s preparations, the limited advance he initially made may seem surprising.

After leaving Chester he crossed the Dee and followed the river to the north-west, travelling just 13 miles before halting at the virgin site that would become Flint Castle.

The king had advanced into an area of north-east Wales known as Tegeingl, roughly equating to the land between the rivers Clwyd and Dee.

There were few natural invasion routes into this area and – despite its proximity to Chester and the English midlands – it was a hard territory to conquer because of its mountains, rivers, marshes and heavy woods.

Such terrain favoured the guerrilla tactics of the Welsh troops, meaning that even the most powerful English armies had to beware of counter-attacks and needed to look to their supply lines.

Edward’s limited advance reflected these problems and explains why he was so anxious to secure another impenetrable base in such close proximity to Chester.

Since June 1277 the king had been recruiting huge numbers of carpenters, masons and labourers, and around 1,850 of them were set to work on the new fortification; over half the number were diggers, initially employed to make ditches and ramparts to protect the army.

In the interest of speed, the initial construction was in wood and a huge naval operation from Chester provided the timber that was needed. But Edward was determined to secure the English hold on Tegeingl, and over time the timber would be replaced by a mighty stone castle.

Edward’s army remained at Flint for a month, the king increasing the wages of his workmen in this time and also hiring increasing numbers to join their ranks.

In addition, Edward was already preparing for the next stage of his advance, which would mean penetrating the deep forests of Tegeingl, territory ripe with opportunity for Welsh ambushes.

While the masons and carpenters continued their work at Flint, some of the labourers were detached under a protective shield of knights and crossbowmen to make a broad road along which the army could safely advance.

The scale of this effort is suggested by the belief that the road may have been around 400ft wide, or four times the width of a three-lane motorway.

This super-highway would eventually allow Edward’s army to advance across Tegeingl in a day, reaching the Clwyd where the king would build his next castle, Rhuddlan.

French influence on the design of Flint

Such efforts helped persuade Prince Llywelyn to make peace in 1277, with Tegeingl amongst the king’s territorial gains acknowledged in the Treaty of Aberconwy. Work continued apace at Flint, which was largely complete by 1280.

The level of influence on the design that can be attributed to Edward’s star engineer, the Savoyard Master James of St George, is unclear as he did not take responsibility for the king’s Welsh castles until 1278.

A continental influence has often been cited in regard to Flint, but this was not necessarily from Savoy.

It is regularly compared to Aigues-Mortes, which lies on the coast of southern France between Montpellier and Marseille; Edward had sailed from there in 1270, during his crusade.

The core of Flint castle was an almost perfectly square enclosure with a round tower on each corner. The great south-east tower was a hugely enlarged structure that could serve as an independent keep (or donjon); this is often compared to the tower of Constance at Aigues-Mortes.

Concentric fortifications were laid out around this powerful core, with a tidal moat adding to the defensive strength and ensuring that the castle could be supplied by sea.

As the stone fortification was being built, a borough was laid out in a near-perfect grid pattern under its walls, defended by earthworks and timber palisades.

The harsh rule of Edward’s officers after 1277 caused great disquiet and resentment in Wales, leading to a major rising in 1282.

Flint was attacked in the earliest days of the war, the terrified English burgesses deliberately setting fire to the town as they fled to take shelter in the castle.

The walls of the fortification held true, as they did again in the Welsh rising of 1294; in both wars, Flint would prove its worth as a vital staging point for the English forces to rally to as they prepared to campaign deeper into Wales.

But perhaps the castle’s most famous place in history came in 1399.

It was at Flint that Richard II fell into the hands of Henry Bolingbroke, the king abdicating in favour of the man who would become Henry IV.

Various stories have been embellished around this incident, most notably by William Shakespeare in his play Richard II.

Flint Castle was held by the Royalists in the English Civil war, but fell following a three-month siege and was slighted by the Parliamentarian troops. The remaining stonework is largely what can be seen today.

And remember that Dragon Tours can help you visit Flint, or any of Edward I’s other Welsh castles.