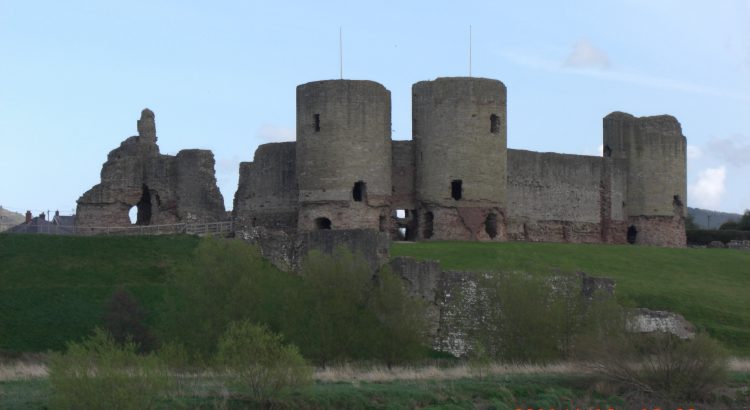 Learn more about Rhuddlan Castle, one of the major fortifications built by King Edward I in his conquest of Wales.

Rhuddlan Castle was built by Edward I as part of his 1277 war in Wales, constructed as a concentric fortification on a greenfield site, with access to the sea.

In these aspects its history mirrors that of the castles of Aberystwyth and Flint, but Rhuddlan was a much more symbolic location than the other two and this was reflected in the grandiose plans that the king had for the building.

Rhuddlan was a key strategic site in the many clashes there had been between English and Welsh. The Anglo-Saxons and Welsh had vied for control of north-east Wales for centuries, and we know of a clash of arms in the area in 796, the so-called battle of Morfa Rhuddlan.

Welsh legend has associated this great Anglo-Saxon victory with the completion of Offa’s Dyke, and it has also been suggested that Offa’s death in 796 was in some way connected to the conflict.

The Anglo-Saxons penetrated the area in the early tenth century, and there are references to their fortified burh at ‘Cledemutha’ (Rhuddlan) in the period 921‒c. 950.

In the eleventh century it was reclaimed under Welsh rule and Gruffudd ap Llywelyn, the only king to rule all Wales, had a major court at the site of Twthill, 300m to the south-east of the site used for Edward’s castle.

Control of Rhuddlan and the surrounding territory fluctuated between English and Welsh throughout the eleventh, twelfth and thirteenth centuries, and in the 1240s Edward’s father, Henry III, had chosen to build a major new royal castle at Diserth.

This was an ancient fortified site on a formidable hill, two-and-a-half miles east of the old castle at Twthill, Rhuddlan.

Although only ruins now remain, the strength of the rock on which the castle was situated is suggestive of the power of this stone fortification.

However, the decision to build it away from any sea or river supply points would prove to be a major strategic weakness, and in 1263 it was isolated and utterly destroyed by Prince Llywelyn ap Gruffudd.

Llywelyn would retain his control of this area of north-east Wales – known as Tegeingl – until the war in 1277, but in the late summer of that year Edward began his methodical advance from Chester.

His first stop was Flint, where he began the construction of a mighty castle while clearing the difficult woodland to create a ‘super-highway’ across Tegeingl to the banks of the Clwyd.

This preparatory work allowed his army to advance the 20 miles from Flint to Rhuddlan in a day, the king immediately beginning work on his new castle on a virgin site on the eastern bank of the Clwyd.

The castle was positioned on the closest fordable spot to the sea on the marshy river estuary, the water access allowing supplies to be brought in should the walls ever come under siege from the Welsh.

In order to ensure this, the river Clwyd needed to be straightened with the cutting of a deep-water canal, two-to-three miles in length.

Huge numbers of diggers – at one point numbering 1,000 – were set to work at this task for a period of three years.

The early work on the castle itself may have been supervised by the veteran engineer Master Bertram, but this was intended to be Edward’s showpiece construction in Wales and responsibility was passed over to the king’ star engineer, Master James of St George.

The intention to make this the main royal base in the region was reflected in the laying-out of a garden for the queen’s pleasure, and the abortive plans to transfer the bishopric of the region from St Asaph to Rhuddlan.

The inner ward was a striking diamond shape, with twin gatehouses to east and west and round towers at the other points.

These towers dominated the outer ward, which had its own, lower curtain wall and was surrounded by a moat on three sides, with the river Clwyd to the west.

A new, bastide-type town was laid out on the northern end of the castle, defended by banks, a ditch and timber palisade; work on castle and town was largely complete by 1281.

Rhuddlan Castle and the conquest of Wales

Rhuddlan’s role as a place for pageantry and spectacle was shown following Llywelyn’s submission in 1277.

The prince was brought before the king in his new castle on the banks of the Clwyd, Edward showing stage-managed magnanimity by pardoning his rival from the need to pay huge and unrealistic war reparations.

The peace lasted for five years, before the harsh exactions from Edward’s officers in Wales sparked a national rising.

Rhuddlan was attacked in the early stages of the 1282 war and it seems that the town fell but the castle walls held true.

Edward put his household troops in the vanguard of the fightback and – in one of the earliest operations – Amadeus of Savoy led a force to relieve Rhuddlan.

Leaving Chester on 21 April, he advanced along Edward’s well-prepared military highway, allowing him to relieve the garrison at Rhuddlan, begin repairs of the badly damaged buildings, and be back at Chester by 25 April.

The castle then served as the key English campaign base in north Wales as Edward fought to subdue the land known as the Perfeddwlad – north-east Wales between the Conwy and the Dee – before advancing further west, beyond the Conwy and into Snowdonia.

The bitterness of the fighting is indicated by a report in the autumn of 1282 stating that the military cemetery at Rhuddlan was full to capacity.

Edward completed the conquest of Wales in 1283, and the importance of Rhuddlan was revealed in the 1284 legal settlement that was made to govern his new land; known as the Statute of Rhuddlan, it was pronounced from his showpiece castle on the Clwyd.

However, the king’s new conquests also meant that the importance of Rhuddlan would now decline.

It was no longer a fortification on the border of Edward’s lands as he had now advanced across the whole of Gwynedd.

In conquering Snowdonia, he gained possession of Caernarfon, an even more symbolically and mythologically loaded location where the king would invest huge sums on the most ostentatious of all his castle designs.

In the future, this would be the site of pomp and circumstance for English royal display in Wales.

In the great Welsh risings of Madog ap Llywelyn (1294–5) and Owain Glyn Dŵr (early fifteenth century), the role played by Rhuddlan would mirror that of 1282–3; its town was taken and ravaged, but the castle held out and would serve as an important campaign base in the eventual English recovery.

Like so many of the great Welsh castles, it was garrisoned by Royalist troops in the English Civil War, then partially demolished (in 1648) by the Parliamentarians after it was taken.

And remember that Dragon Tours can help you visit Rhuddlan, or any of Edward I’s other Welsh castles.